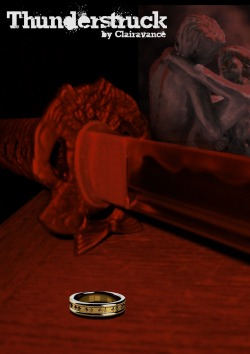 She looked over her shoulder at the sudden thud. Her grip eased on the receiver when she saw it was just the cat settling itself on the cabinet. It stared back at her with its spring green eyes. She turned her back and cradled the phone closer to her ear with a sigh.


"Zerina, is everything alright? How are you getting along with your in-laws? Are they nice?" Her mother's voice was never more of a comfort than it was now.


"I don't know, Mom. They're...different." She felt an eerie tickle at the back of her neck as she said it - the disconcerting feeling that there was another person in the room with her, watching her.


"All families are different, child. How is Deondré, and how is his daddy doing?"


"But you've helped him, haven't you, Zerina? You should be able to assess the man's condition by your own logic."


"No," Zerina said softly, "I haven't seen his father at all. I think they lock him in his bedroom."


"This whole household is strange and Deondré... he's different, too," Zerina said, wrapping the phone cord around her fingers nervously.


"What do you mean he's different?"


"He's very cold toward everyone."


"No, Mom," Zerina said with a colourless smile, "You wouldn't understand unless you saw him yourself, and he's unbelievably nasty, too."


"What did he do to you?" Her mother said sharply.


"He's not mean to me, Mom," Zerina said with a twinge of irritation, "He's like that with his sisters."


"Give him time, Zerina. Maybe if you don't pursue the issue, he'll open up to you when he's ready."


"Maybe you're right," She sighed, scowling as she surveyed the drawing room. The feeling of being watched was disturbing, and she had a right mind to tell off whoever was eavesdropping on her.


Her gaze fell on the cat. It was still on the cabinet, still staring back at her steadily. It flicked its bushy black tail. The eeriness she'd been feeling tripled. "I've got to go." Zerina whispered and hung up, her eyes locked with that of the cat.


She started moving toward the door nervously. Even when she stepped into the corridor it was still staring at her. Zerina felt herself incapable of looking away. The hair on her arms rose when the cat made a graceful leap off the cabinet and slowly started stalking toward her. She wanted to run, but her body was as motionless and heavy as stone. Her heart thumped hard against her chest. Something was very wrong here, and she needed to get away...


Eyes as green and vibrant as the cat's suddenly filled her field of vision, and Deondré gently touched her shoulder.


"Beloved, why are you-" He cut off abruptly and turned sharply.


The cat was still coming toward her, undeterred by his presence. Deondré moved so fast that Zerina lost her breath. He slammed the door shut with a violent jerk, and turned hard eyes on her. The instant the cat was out of her sights she had her body back under control. She leaned against the wall, drawing in slow, deep breaths to steady the wild beat of her heart.


Deondré stepped closer to her, and with a firm hold he steered her down the corridor by her elbow. "We need to talk."