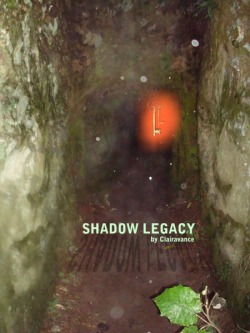 The evil that is in the world almost always comes of ignorance, and good intentions may do as much harm as malevolence if they lack understanding.

The six year old girl looked up from her bed, dark locks bouncing about her shoulders and gold-brown eyes widening when she heard her mother fussing down the hallway in the kitchen.

“Amby, I told you, no biscuits before dinner!”

“But I didn’t have a biscuit, mommy!”

The little girl wiped the sticky crumbs from her lips on her sleeve, and guiltily rolled off her bed, eyes feverishly searching for a good spot to hide her half eaten treat.

Haley looked at the chocolate biscuit in her hand and, resolving that she would rather finish eating it before getting into trouble, she turned toward her cupboard. It was a more comforting hiding place because her mommy would know if she were hiding under the bed. Haley could never contain her nervous giggles at the sight of her mother’s feet at the side of her bed.

She flung the heavy cupboard door open, stepped into the small square, and struggled to close the door behind her. She had to pry it shut with her fingernails because there was no knob on the inside, and once she managed to shut it, she was startled at just how black it was inside.

The darkness was dense. So was the silence. The door was heavy enough to block out any ray of light and to deafen the sounds of her household. She couldn’t hear if her mommy had come looking for her in her room or not.

But it didn’t matter. The dark wasn’t scary right now because she had all the time in the world to finish her chocolate biscuit.

It was only when she was finished with it, and turned her head to the side to listen for any sound in her room, that she caught sight of a greenish colour in her peripheral  sight.

Haley turned toward the colour, and her mouth dropped open in a small ‘o’.

A funny, angled picture of a door was drawn on the back wall of her cupboard. It was a pretty, luminous green colour that seemed to glow in the dark. She traced the shape with her finger, mesmerised by the colour. It wasn’t a very big door, and there was only a round dot where a doorknob ought to be.

Haley pressed her finger against the dot curiously, and drew in a sharp breath when her finger went right through it. Something cut her skin when she yanked her hand back reflexively, and she stared at the picture in dismay as she sucked her wound.

She pulled a face and wiped her finger on her dress. Haley turned away from it and pushed her cupboard door open with both hands. The heavy door gave way, but the room she stepped into wasn’t her purple and pink patchwork bed or her familiar light  curtains.

It was a dark room, lighter than her cupboard but still too dark for her to immediately discern any shapes.

As she looked about, her eyes adjusted to the lack of light, and she could make out a shape huddled in the corner of the room. It had large wings, she noticed as she slowly approached it.

She could tell his hair was as white as snow, because it was the only thing in the room that seemed to not be dark. She stopped and tilted her head to the side.

The boy didn’t answer. Haley knew he was looking at her, and some part of her knew that she should be very afraid of him. But he was an angel. He had wings like an angel. Mommy said that angels were good.

Haley reached out and softly poked him on the shoulder. The boy dropped his head against his knees.

“Why are you sad?”she asked.

His skin felt funny under her fingers. It was cold at first, but it became hot very quickly until she had to move her hand away.

“What are you doing here?”

The boy didn’t respond, and she tried again to touch his shoulder. This time, her fingers burned like she’d touched fire. She stood, biting her tongue and rocking back and forth on her toes and heels. She sent a glance around the room – she couldn’t tell if there were any doors or windows other than the door she’d come through. She clasped her little hands together in front of her.

“Would you like to come see my room? I have a little pink unicorn. I call her Sleepy because she’s always in bed with me.”

The boy looked up sharply at her words, and nodded.

“My room is through this way,” she said. She paused on the threshold to see if he was following her. He was. He’d gotten to his feet, and stood far taller than her. His wings were enormous, jutting out behind his back like the surfboards her daddy made in his garage.

There was another door at the back of her cupboard. Or maybe it was the first door. Haley couldn’t tell which. She opened it and stopped when a slither of light pierced the dark around her.

The boy was hanging back.

“Don’t be shy,” Haley said, and pushed the door open a little wider. “Would you like a biscuit?”

The boy shook his head and moved further back into the dark.

“Are…are you afraid of the light?” She asked with a frown.

“You’re a funny angel.” Haley studied him for a long moment, trying to make sense of it. Then she had it.

“Mommy says that angels watch over us at night when we sleep. Maybe that’s what you should do –come to my room at night?"

“Okay then, I’ll see you tonight. And I’ll bring you a biscuit, too. See you later alligator,” Haley said sweetly, and quietly closed her cupboard door behind her.

That night, as her mother tucked her and her sister into bed, Haley smiled when her mother said,“May the angels watch over you tonight and bless you with sweet dreams”.

Haley lay in her bed and watched her mother turn on their pink lava lamp before turning off the main switch by the wall on her way out. She looked over at her sister, whom was snuggling deeper under her
covers, and reached over to turn off their night light. She took out the chocolate biscuit she’d hidden under her pillow earlier that afternoon, and contemplated breaking off a piece for herself.

“Why did you turn off the light?”

“I’ll just turn it off again.”

“I don’t like the dark, Haley,” her sister wailed quietly.

“Why not? There’s nothing to be afraid of.”

“Because mommy said the angels will watch over us, that’s how.”

“But it’s too dark for the angels to see us.”

“No it’s not. The angels like the dark better.”

“No they don’t. Mommy said the angels are creatures of light.”

Haley sat up in her bed abruptly and glared in the direction of her sister’s bed. “Mommy must have never met any angels then because the angel I saw doesn’t like the light.”

“Maybe because it’s my angel and only I can see it.”

“It’s not silly. You are just jealous because you don’t have an angel.”

“Mommy says sharing is caring.” Amberly said after a beat of silence.

“I think you need to find your own angel, Amby. Mine can’t be with you and me at the same time.” Haley huffed and fell back into her pillows.

“What is your angel’s name?”

“Red? What kind of angel calls themselves a colour?”

“He didn’t say his name is Red. I’m naming him Red because I like it.”

“You can’t name him. All angels already have a name.”

“Well if he had a name, he would have told it to me, wouldn’t he?” Haley said crossly.

“Maybe he had a reason not to tell it to you.”

“Like what?” Haley asked, staring up at the glow-in-the-dark-star speckled ceiling.

“I don’t know,”Amberly said after a long moment. “I’m tired.”

Haley lay listening to the night sounds. There were frogs burping outside their window, and crickets clapping in the yard. Amberly’s breathing became deep and slow, and Haley turned onto her side to
stare across the room at her sleeping sister. Her eyes had adjusted to the dark, but now her worries about not being able to see her angel – not being able to see Red in the dark – was replaced with the concern that she would fall asleep before he came.

Her eyes were getting heavy, and it became a losing battle to remain awake. Her head was being dragged into a peaceful dream world, filling her mind with a comforting fogginess. Haley turned over, her back
to her sister, to face the cupboard. She saw the door open slowly, without a sound, just before sleep claimed her for the night.

When she woke up, the room was still dark, and she wondered for a second why the nightlight was off. Then she remembered, and looked toward the cupboard in excitement. The doors were closed. She listened intently, but all there was to hear was silence.

Disappointed, Haley sleepily swung her legs over the side of her bed. She sent a glance over at her sleeping sister, and then tiptoed toward the cupboard. She opened the door and peeked inside, and felt her disappointment mount. Nothing. Just their clothes hanging and their shoes lined up on the floor.

She closed the door and was about to get back into bed when she heard a strange noise come from under her bed.

Haley crouched down beside it and carefully lifted the frills to see. And there he was. Flat on his stomach, without his wings, moonbeam pale in the shadows under her bed.

“Hi,” she whispered, and his head snapped in her direction.

His eyes were black, like black cat eyes. Dark little shapes in an otherwise colourless face.

He shook his head at her, his eyes never leaving her face, never blinking.

“I can’t play with you. You have a Watcher.” His voice sounded nice, like peaceful music.

Haley frowned at him. “What’s that?”

He wouldn’t talk to her then, but she understood that whatever a Watcher was, he was scared of
it.